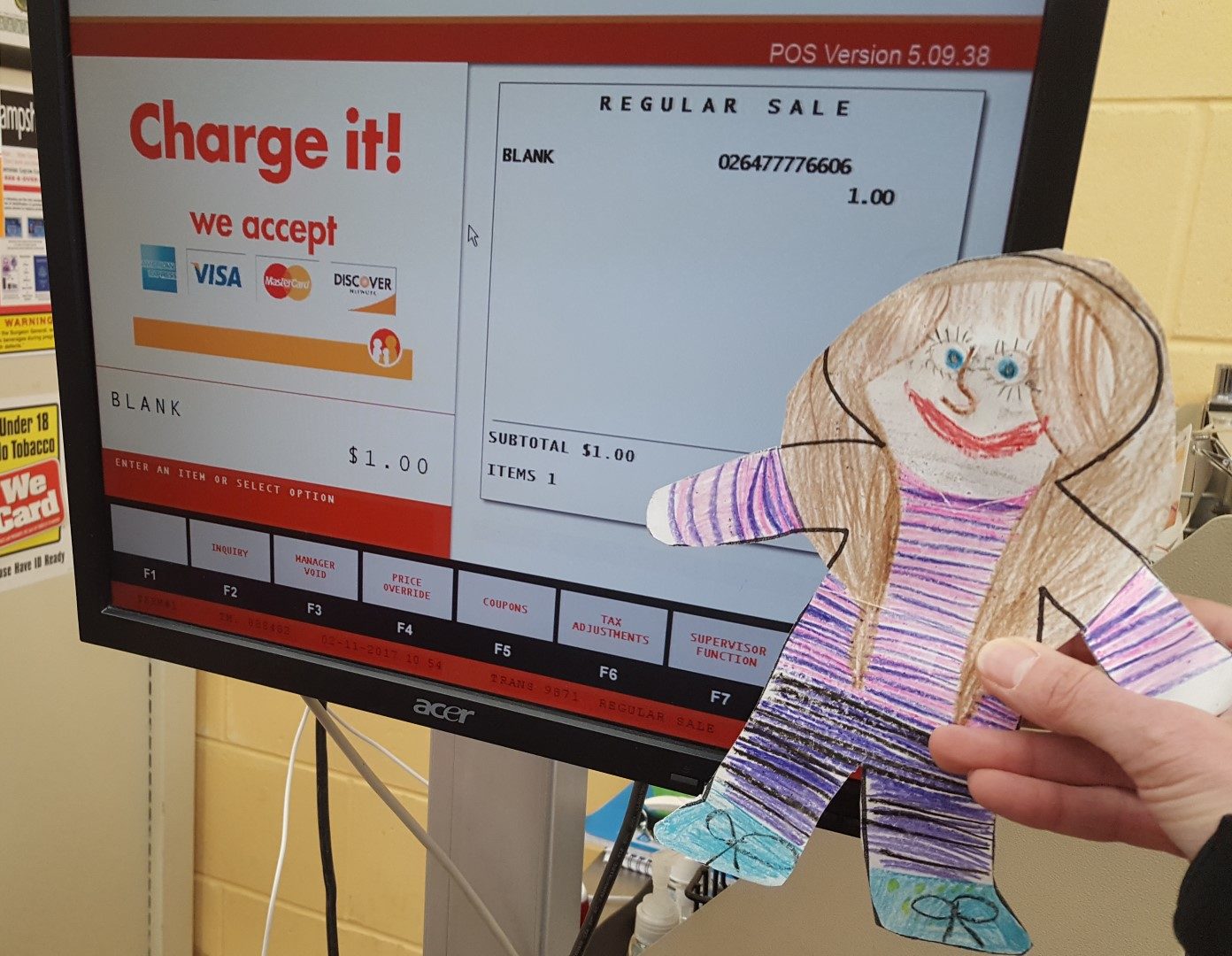 Recently, we received a large envelope in the mail that was part of a student Flat Stanley project. The intent behind these projects is that students create a small paper avatar of themselves and mail it, along with a list of desired recipients, to a friend or family in a different geographical region. The idea is that each person should take some pictures of the avatar in interesting local venues, and then forward the bundle on to the next person on the list.

Since we did some driving around Nashua and southern NH in general, seemed worth a post.

First stop, was the Dollar store to purchase a card that we’d use to mail copies of the pictures. New Hampshire has no general sales or income tax so buying a $1 item means that when you check-out, it still rings up as $1…. And we are off to a fun start.

Next stop, Nashua City Hall- In 1960, then candidate John F. Kennedy kicked off his campaign for president in Nashua.

The next obvious stop was going to be the gun show that was happening in Nashua today but along the way, we passed one of the many local Ice cream stands in New Hampshire. Different survey’s seem to have different results but NH is generally agreed to be in the top 10 consumers of ice cream per capita.  Here we are at Hayward’s in Nashua.

With the ice cream detour out of the way, it was back on the road to the gun show. Upon arriving in the parking lot we quickly saw one of the many vanity plates that are common in the state. Once again results differ year over year but for the most recent data I could find, New Hampshire is #2 in per capita vanity plates. Of course even in that position, we still have the coolest slogan “Live Free or Die”.

Walking past the car we noticed a Porcupine logo magnet on the side of it.  This magnet is associated with the Free State Project. In 2003, the group voted and picked New Hampshire as the focus of the project. The idea was to get 20,000 people to sign a statement of intent that said “I hereby state my solemn intent to move to New Hampshire with the Free State Project. Once there, I will exert the fullest practical effort toward the creation of a society in which the maximum role of government is the protection of individuals’ rights to life, liberty, and property.” Once 20,000 signed the statement, this would ‘trigger the move’ and participants would be expected to move to New Hampshire. In February of 2016, the threshold was reached and to date, more than 2,000 people have made to move to NH as part of the Free State Project.

After braving the snow in the parking lot we finally approached the venue.

Upon making it inside, we found a nice Sig Sauer pistol on sale. Sig has a factory and a training facility in New Hampshire along with Ruger.

Also in the gun show was a black and yellow “Don’t Tread on Me” mat. This design is fairly common across the state on flags, bumper stickers and apparently gun mats.

By this point in the day, we started to get pretty hungry and we decided to head north to Manchester and stop in at Murphy’s Taproom.  Murphy’s has been the home to a fairly regular event called Taproom Tuesday where liberty lovers and Free State Project participants have gotten together for socializing and discussions. In 2007, presidential candidate Ron Paul even stopped in for a brief chat.  Today was a little more quiet and our flat friend simply got to checkout the bitcoin vending machine at Murphy’s.

On the way out, we noticed a Super Bowl champions Patriots poster on the door and decided to stop and take a picture. Go Pats!

From here, we decide to continue north to the New Hampshire State House in Concord,  but along the way, we stopped off at one of the states many Fireworks stores. Most large size fireworks are legal for purchase by the general public. Oddly, small firecrackers are still illegal but several attempts have been made to repeal the odd  ban. 2017 Senate Bill 23 has recently passed the Senate and is likely to pass the House and be signed this year.

Finally we made it to the State House. This statue of Daniel Webster is directly in front of the main entrance. Daniel Webster was born in Salisbury, New Hampshire, the present-day city of Franklin. He served in the US House, the US Senate and twice as US Secretary of State.

The snow was a little too deep to get close to General John Stark. Live Free or Die but don’t freeze your feet. John Stark was born in Londonderry, New Hampshire (at a site that is now in Derry). He served in the Continental Army during the American Revolution and is credited with the phrase “Live Free or Die: Death is not the worst of evils” which became the state motto of New Hampshire in 1945.

And of course no trip to the Capitol would be complete without a visit with the 14th President of the United States Franklin Pierce. President Pierce was born in Hillsborough, NH.

The final stop on the journey was the McAuliffe-Shepard Discovery Center also in Concord.  Christa McAuliffe was a teacher in Concord, NH and was to be the first teacher in space. She was one of the seven crew members killed in the Space Shuttle Challenger disaster on January 28th, 1986.  Alan Shepard was one of the original NASA Mercury Seven astronauts. He was born in Derry, New Hampshire and completed all of his primary and secondary education in the state.

And so we bid goodbye to our paper friend. Unfortunately we need to mail her off to California now. Maybe some of New Hampshire will rub off on California. Though I don’t expect constitutional carry is transmissible by mail.

Check us out on memo.cash